Damon Brown is one of the UK’s leading jazz trumpet players and composers. Born in Manchester (UK) before studying the trumpet at the Leeds College of Music and London’s Guildhall School of Music.

Since his debut as composer, player and bandleader Damon Brown has confirmed his place in the UK jazz scene: he has played over the years at all the UK’s leading clubs and festivals and has also performed internationally, particularly in Europe and the Far East, with his own groups. His sideman credits include tours with international stars such as Benny Golson, Dave Liebman, Doug Raney , Big Jon Patten and other luminaries. He has also performed with many of the UK’s leading players such as Peter King, Stan Tracey, Claire Martin , Don Weller and Alan Barnes.

A string of successful recordings in the last decade have cemented his reputation further and his collaborations with iconic tenor sax player Steve Grossman have been hugely popular with jazz audiences and critics alike .The Steve Grossman / Damon Brown Quintet recorded their first CD ‘This Time The Dreams On Me’ in 2008. It was released in 2009 to considerable critical acclaim.

In addition to his work with his Quintet Damon has diversified his writing and playing into other formats. In 2007 the group Killer Shrimp, which he co-leads with Ed Jones, won the 2007 Best Live Jazz Group at the All Party Parliamentary Jazz Awards. Their first CD, Sincerely Whatever, was nominated for Best Jazz CD of the Year. Damon Brown continues to teach and perform in Europe and Russia and also in the Far East, most notably in Japan, where he has collaborated each year with the pianist Yutaka Shiina,Tim Armacost, tenor saxophone and GeneJackson on drums. 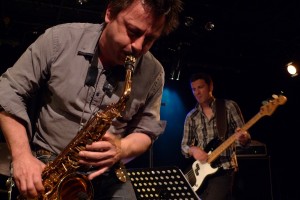 For “Le Monde” he is a “master of the alto saxophone” – the Frenchman Pierrick Pédron. In his homeland he has long been one of the most respected and in-demand jazz musicians, where he has won the “Concours de la Defense” and other major prizes like the “Prix Django Reinhardt” or the “Prix Boris Vian”. Pédron also works internationally with the well-known compatriots the likes of Baptiste Trotignon, Vincent Artaud and the Belmondo brothers, and with the US stars Wynton Marsalis, Mulgrew Miller and Lewis Nash. With strong roots in the spirit of bebop, he is a master of high-energy, breakneck straight-ahead modern jazz, while at the same time daring quite naturally to experiment with rock, fusion and electronic music – and yet always managing to sound entirely like himself.